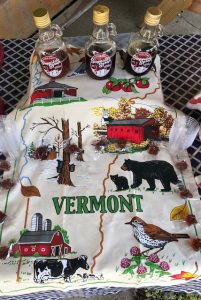 I had the pleasure of going on a cycling trip last August from Vermont to Quebec. It was gorgeous and I associate Vermont with maple syrup, Ben & Jerry’s and more maple syrup. Vermont has many delicious local foods, often times including maple syrup in the ingredient list. Our trip consisted of maple syrup “shots” to tackle the challenging hills.

Vermonters that participate in “sugaring” the process of collecting maple sap and turning it into syrup, want everyone who travels to Vermont to get on the maple syrup bandwagon by having a handful of different uses for it. It takes approximately 6 weeks tromping through snow and mud tapping the “sugarbush”, watching sap drip, and then spends hours standing over a boiling evaporator to see those 40 gallons of sap turn into one gallon of thick golden maple deliciousness.

Maple syrup is processed into dozens of types of candies, butter, sugar, cookies, and many different sauces and condiments (the maple syrup glazed salmon was delicious)! Maple syrup contains vitamins  B-2, B-5, B-6, Biotin, folic acid and has a rich source of calcium, in fact it has the same as whole milk.

Maple syrup also plays a role in political movements: During the Civil War people in the north turned to maple syrup to protest against cane and corn sugar that relied on slave labor. Today Vermont maple producers continue to donate 8,300 quarts of syrup to soldiers in Iraq through “operation maple sweetness”.

Vermont is known for their environmental consciousness, and Vermonters are also proud to report that proper tree tapping does no permanent damage to the tree. Some maple trees have been tapped for over a hundred years. Pure Vermont maple syrup is often considered a cut above syrup produced in other New England states and Canada (the maple syrup in Quebec was delicious too!). This is a fact that Vermont proudly praises and protects. Vermont law prohibits the use of any preservatives or additives, and the Vermont Maple Sugar Makers’ Association, founded in 1893, is dedicated to preserving the syrup’s integrity.

Did you know that Vermont produces over 400,000 gallons of syrup each year; one-third the national supply and more than any other state?  However there is competition for abroad. Quebec produces 4.9 million gallons per year, more than the US and other Canadian provinces combined. Sadly various fad diets have contributed to a reduced US market consumption of syrup by 58%. This is an alarming trend for a state that depends on the $120 million dollar industry. When the climate change occurs, you may be looking at an entirely changed industry in a few years.

Until that happens, enjoy all the maple syrups, baked goods, candies and condiments.

Eating Fat… Better for you than you thought (February 2019) What is Size Acceptance? (April 2019)

What is the Satisfaction Factor? (August 2021)

“Maximizing your Time with Those Struggling with an Eating Disorder”